I started playing piano when I was about 5 years old.  I would learn to play melodies and songs I had heard by ear.  When I was 8, my parents took me to see George Winston in concert at Abravanel Hall.  I remember watching him play, watching his hands on the keyboard, and being mesmerized by everything he was doing.  I then learned to play a lot of his songs by ear by listening to his CDs over and over, and a short time later, I started writing my own songs.


Growing up we had an old spinet piano in our house and I played that piano almost every day.  I wrote many songs on that piano.  When I was fourteen, I moved to Portland, Oregon, and my mother bought me an old upright piano to play on.  I used to write songs using a tape recorder on top of the piano, and still have those tapes today!


Many years later, in the year 2000, when I was in my late 20’s, my mom asked me to make her a tape of my songs so she could listen to them when I wasn’t with her.  I agreed and borrowed a Yamaha Clavinova keyboard from my aunt, I set it up in a quiet room in our house, and used a cassette tape recorder, just like I had done when I was younger, to record 20 songs I had written over the years, mistakes and all.  It was very homemade and makeshift.  I then made 30 copies of that tape, designed an album cover, titled the songs, and called the album “Beginnings”, which I gave as gifts to friends and family for Christmas that year. 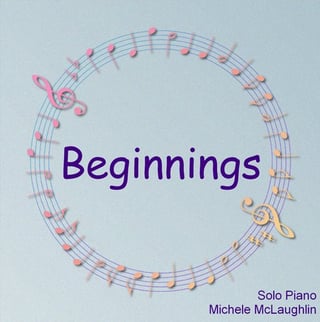 
The response I received was overwhelming.  I received comments like,  “We had no idea you played piano so well!”, or “Why don’t you make more of these!”, and “You should write more music!!”.  It was inspiring, and motivating, and it did so much to boost my self esteem.  I used to be really shy about my music, and my playing, and this helped bring me out of my shell.


Shortly afterward, I purchased my own Yamaha Clavinova piano, and in the short span of a few months, I wrote sixteen new songs and recorded my first official CD album, Elysium.  I had it professionally mastered in my uncle’s studio, and I designed and manufactured all the CDs on my own.  It was still homemade, but a big step up from the cassette tape I had released the year before.  I decided then that I would make an album to share with friends and family for Christmas every year.  This was the beginning of my incredible sixteen year journey, and how I eventually made my dream of becoming a full-time musician come true.  Sixteen years and sixteen albums later, I am living the dream that I didn’t think was possible.  All because my mom asked me to make her a tape.